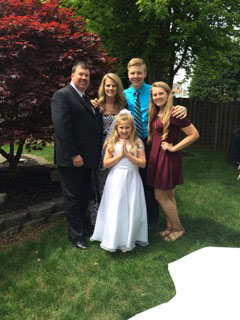 Tim and I both grew up in the Levittown area. I lived in the Oaktree section of Levittown, attended St. Michael the Archangel School and graduated from Bishop Conwell High School in 1988. I attended West Chester University for two years then transferred to Temple University earning a Bachelor of Business Administration Degree majoring in Actuarial Science. Tim lived in the Golden Ridge section of Levittown, attended Emerson Elementary School, Armstrong Middle School and graduated from Truman High School in 1985. Tim earned a degree in Electronics from Lincoln Technical Institute. We’ve been married for 24 years and have lived in Fairless Hills for the past 15 years. We belong to St. Francis Cabrini Parish. Tim works for Verizon as a splicing technician, and I work for AUL Risk Management Services as an Assistant Actuary.

Justin is 16 years old. He attended St. Francis Cabrini School from Kindergarten through third grade. He attended Holy Family Regional Catholic School from 4th grade through 8th grade and is currently a sophomore at Conwell-Egan Catholic. In 8th grade, Justin received the DLFF scholarship award to attend CEC. Justin is very sports oriented. At Holy Family, he was a member of the soccer and basketball teams, while also playing for recreational and travel baseball teams outside of school. At Conwell-Egan, Justin quickly picked up golf, and also became a member of the basketball and baseball teams. Justin is now on the Varsity baseball team as a Sophomore. Along with sports, Justin participated in Spirit Night, showing true school spirit in one of the biggest events of the year.

Deanna is 9 years old. She is currently a student at Holy Family Regional Catholic School. She has been attending school there since Pre-K3. Deanna enjoys playing CYO basketball and soccer for Holy Family. She also participates in Holy Family’s Musicals and recreational softball outside of school.

If you are interested in being "in the spotlight", please email Mary Ann Conway at maryann.conway@hfrcs.org.

Stay involved with the HFRCS family.

It's easy to support HFRCS. We thank you for your generous gift!

Stay involved with the HFRCS family.

It's easy to support HFRCS. We thank you for your generous gift!